My scientific career must have begun during my Undergraduate studies at the University of Bochum. I fell in love with animal ethology. Unfortunately, I noticed that studying large animals (like whales) can be quite difficult. This is when I became interested in insects. These were animals that can easily be observed, even though they seemed to live in a completely different world from my own. 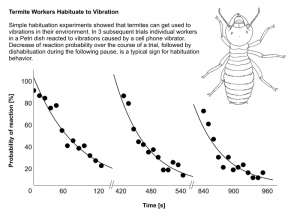 Termites are fascinating animals. They are among the oldest insects and build underground or above-ground, earthen tunnels to their food sources to hide from potential enemies like ants, spiders, birds and overexcited scientists. Their main defensive strategy is the development of a soldier caste, but a huge population size and a robust nest structure make it almost impossible for a predator to significantly harm a colony. In the Philippines, I was able to follow some colonies on a daily basis and study their defense behavior. Later I studied the learning behavior of a large termite, Macrotermes natalensis, in the South African Soutpansberg mountains. Interestingly, it turned out that termites can be just as smart as ants and bees (the model organisms when it comes to insect learning behavior).

Bumble bees (Bombus spp.) are creatures I am particularly fond of. In Germany, I investigated their foraging behavior and odor preferences and found that th 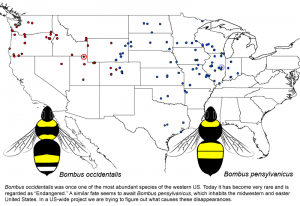 ey … don’t necessarily prefer Silver Linden odor to others. This too is a result, even if it may not be the most interesting one. More interesting was bumble bee ecology and especially pathology. Over 3 years, I focused on the diseases and other influences that could be causing the decline of bumble bees in the U.S. I particularly focused on a pathogen called Nosema bombi, an incredible fungus that seems to be prevalent in bumble bees all over the world.

My fascination for the evolution and ecology of insects has led me to the Bielefeld University. For my PhD thesis I studied phenotypic plasticity in wax moths – social parasites of honey bees. In search for an invertebrate equivalent of something like personality, I experimentally investigated the causes of individuality in these tiny insects. Wax moths, which attract females with ultrasonic songs, are nearly perfect for finding out why some individuals are so much bolder than others.