Cardenio Modern was created because I needed a vertically oriented handdrawn, all-capitals font that looked classy. It needed to look good on top of photos, yet be humble enough to not steal the show. After forty minutes sketching in bed one night, the first draft was created. Six months later, the font was finished. I added a Boldface a year later and have been expanding it since. It currently features 378 glyphs and supports all European  languages (Latin).

Cardenio is the infamous lost play by Shakespeare. The name of the font kind of came about as a word play on something classic that I felt was missing from the (free) font landscape, while at the same time being a modern addition to a world of Instagram, Facebook and co.

In all honesty, compared to professional fonts like my favorites, Sabon and Source Sans, this is an amateurish piece of work. (What would you expect from an amateur?) But it captured the imagination when it was released. It has now been downloaded over 300 000 times and was used in all kinds of advertising, games and postcards. I’m sure you have seen it somewhere before too. 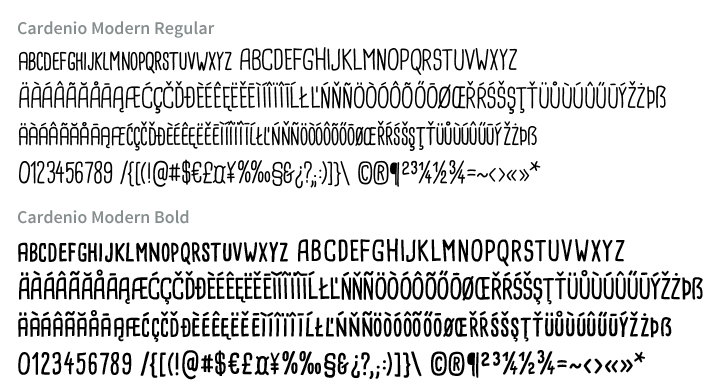