Canted Comic exists because I could not find a proper comic book free font anywhere on the internet (and believe me, there are hundreds) that recreated that comic book feeling of 1960s US comic books. I needed a font for my own comic project and I soon realized it needed to be something more personal than what was offered online. In the end, I abandoned the comic book project, and the font turned out to be closer to its archetype than I originally envisioned it.

I grew up reading Spider-Man comics, and of all the comic books I read (Batman, Uncle Scrooge, Astérix, the Belgian stuff), it was Marvel’s look that defined comics for me. When I see the lettering of Silver Age Marvel comics, I immediately think of classic comic books. Although Canted Comic is not nearly as polished as the hand-lettered originals, I feel that it recreates some of the original atmosphere.

A canted angle is a tilted view that is commonly found in comic books – if for example a superhero races across the side of a building, you often find that the horizon becomes a diagonal line running through the panel. In classic comic books, the boldface is usually tilted (or oblique) as well. This is the hallmark of Canted Comic.

The sister font of Canted Comic is Canted FX. 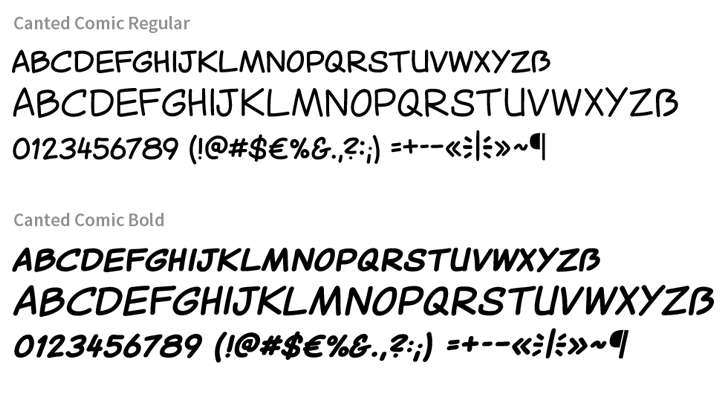