Scientific writing may not be a piece of cake, but like every skill it can be learned and it is far from difficult. As a writing teacher at Bielefeld University I teach first-year students to communicate science. The secret isn’t so much one of format or writing style. All you need to know is exactly what you want to say, because all scientific research has one thing in common: It attempts to answer an exciting question. As Richard Dawkins said: I have long felt that biology ought to seem as exciting as a mystery story, for a mystery story is exactly what biology is. (The Selfish Gene)

→ Schreiben im Biologiestudium (utb 2016), only available in German, check out a preview on Amazon.de 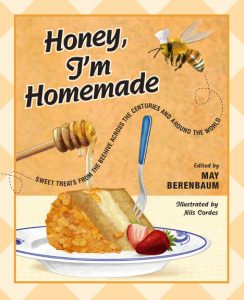 It may come as a surprise to some, but there are almost no cakes without bees. Not only is honey one of the most delicious ingredients for many baked goods, but many fruits and nuts only exist because of our insect pollinators. The entomologist May Berenbaum wrote a delightful cookbook on this matter, including recipes from all over the world. What they all have in common is that non of them would exist like they do without bees. I was honored to be asked to illustrate the book for her.

→ Honey, I’m Homemade (University of Illinois Press 2010), get it on Amazon.com